I’ve tried my share of vibrators that mimic oral sex and I have always been more than satisfied. However, there’s a new pleasure stick in town called the PlusOne Fluttering Arouser and let me tell you, my vagina has a major crush on it. 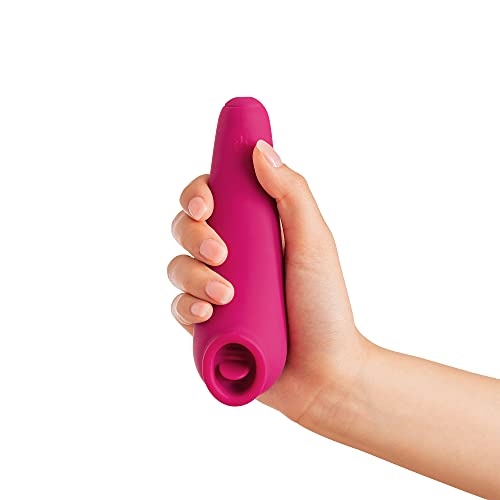 By that I mean I had one of the most satisfying orgasms of my life last night (and this morning), thanks to the fluttering arouser that — well, I am just going to say it — felt like a tongue flicking my bean.

I’ll be honest with you: At first sight, I was a little afraid of this puppy because this silicone tongue moves at speeds so fast, I had to squint and hold it an inch from my eyeballs because I couldn’t tell if it was actually moving or not. I then had flashbacks of all the times I was getting oral and I said, “Faster, yes! Right there, faster!” and realized this was what I’d been needing between my thighs since I hit puberty, and a smile spread across (both sets) of my lips.

I had to make sure this new lover was charged before I took it (or it took me?) for a spin. I need you to know the magnetic charger was one of my favorite features on this super soft pearl pleaser. I mean, the little magnet just gripped right onto the button and started doing its thing. There was no searching for a hole (ahem) and trying to fit the charger in there just right.

So, while I was doing my skincare routine and thinking sexy thoughts to get myself in the mood, my new battery-operated sex servant was getting charged up. And I must say, I didn’t need as much of a “charge” as I thought. As soon as I turned it on and started bringing it down to the Y, I got so turned on from the motion of the PlusOne, I decided to head for my fun bags instead because I wasn’t quite ready to buzz one off yet. I wanted this experience to last longer than half a second since I had the house to myself.

That was a great move on my part, if I do say so myself. So, if you like nipple play, don’t forget to start with the nips first. If you think you can try this fluttering arouser out on your vag then move it up to your nipples after, you will be wrong. Once that puppy is in place, you are never going to want to take it away.

Anyway, using it on my breasts got me so worked up, I was squirming and wishing I had two of these– one of the upper body and one for the lower body– which wouldn’t be too hard to pull off, because I’m a multi-tasker.

It didn’t take more than a second to get the flutterer (which has ten vibration settings, and for the record, I was a 2 all the way home) in the right place. It was easy to hold and I didn’t really need to move it at all because that fake tongue (which feels like the real deal, only faster), was covering all my precious ground, so I just sat back and enjoyed the (very short) ride.

At first, I was holding it so the fluttering arouser was hitting me up and down, which was amazing. Then, I turned it so it was flicking side to side.

Do this. Please do this.

That’s when it was all over for me and I had an explosive orgasm in under three seconds. I was thankful my windows were closed and everyone on the street had their air conditioners or fans blasting because I am still horse from my pleasure cried.

When I went to the bathroom to wash up, my “orgasm legs” were not ready for such an adventure yet. I had to lie back down and go over what just happened in my mind because it was like I’d had the best oral sex of my life and I didn’t have to give directions or wish the person between my legs had a tongue with superpowers.

My life is now complete.

If you are into clitoral stimulation and regular vibrators, or anything with suction is too much for your pearl, you will want to try the PlusOne with its fluttering magic tongue. My advice is to start with the slowest speed and go from there. Don’t forget the nipples and the tip about holding it sideways. And if you think you can go more than two minutes without orgasming, you are wrong. But you don’t have to take my word for it.

The post PlusOne Has A New Vibe With A Fluttering Arouser, And I’ll Never Be The Same appeared first on Scary Mommy.