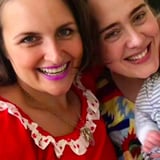 Postpartum psychosis, the most severe postpartum psychiatric disorder, is often a topic that’s only broached behind the closed doors of a doctor’s office. But recently, Adele shared a post on Instagram that’s shed some much-needed light on the matter. She introduced the world to her best friend Laura, a mom to a 6-month-old son, who struggled with postpartum psychosis and wrote a brutally honest blog post about her experience.

“This is my best friend. We have been friends for more of our lives than we haven’t,” wrote Adele. “She had my beautiful godson six months ago and it was the biggest challenge of her life in more ways than one. She has written the most intimate, witty, heartbreaking, and articulate piece about her experience of becoming a new mum and being diagnosed with postpartum psychosis. Mamas, talk about how you’re feeling because in some cases it could save yours or someone else’s life.”

Charlize Theron’s Postpartum Condition in Tully Is Real and So, So Scary

The 30-year-old singer took it a step further by sharing a link to the blog in her Instagram bio – and yes, her experience is definitely eye-opening for new mothers.

Since having my baby boy in February this year, I’ve been suffering from and battling against postpartum psychosis. A rare and unpublicized illness that affects 1 in a 1,000 women and is seen as a medical emergency (don’t worry I had never heard of it either until it tried to ruin my life) . . . In my case, it was built upon postnatal depression and exhaustion and escalated into a phase of what I can only describe as hell; mania, mood swings, insomnia, delusions, paranoia, anxiety, severe depression with a lovely side order of psychosis.

And unfortunately for new moms, there’s no way to plan ahead for it. Laura explained that while she had a wonderful pregnancy and has no family history of mental illness, her labor experience was fairly traumatic.

“I ended up having an emergency C-section and then found out our son was extremely underweight because even though I was two weeks overdue my placenta had failed him and he was starving inside me,” she said. “My doctor believes that my traumatic birth could be what triggered my illness.”

After spending several days in the hospital, Laura was eager to go home with her bundle of joy – but her mental state only seemed to deteriorate once she got there.

“I didn’t recognize myself and I felt like an intruder in my own life, like a fraud and a complete failure.”

“The second I got home and into bed I was drenched in this terrifying overwhelming sense of fear and dread,” said Laura. “Like that Sunday night before school feeling times a million. I felt like I was dying. My breath was short and tight, my heart was pounding out of my chest, and my stomach churned.”

At the time, Laura swiftly rejected the idea she was suffering from postnatal depression. She didn’t feel “depressed” and chugged along assuming time would help mitigate her situation – but she was wrong.

“I knew I wasn’t right, I was hiding the congratulations cards and my own air made me feel sick, my baby was feeding non-stop,” she admitted. “I barely had time to eat or wash and didn’t sleep a single hour – this is all the usual new mum stuff I know – but this wasn’t me, I felt like I had pushed out my personality as well as a baby . . . I didn’t recognize myself and I felt like an intruder in my own life, like a fraud and a complete failure.”

Laura spiraled further. She began having suicidal thoughts, experienced panic attacks and crippling anxiety, and became increasingly paranoid. She even noticed a blue tinge to her skin. Finally, her family staged an intervention.

“After my intervention – which was the worst night of my life – I was hospitalized for two weeks away from my son, bleeding from birth, breasts leaking milk and fully out of my head,” she wrote. “I had no idea where I was. I would sit in group therapy all day every day feeling like my baby had been torn out of my arms.”

With support from her family, a psychiatrist, and medication, Laura was finally able to turn a corner. Now, she’s urging moms to open up about their postpartum struggles.